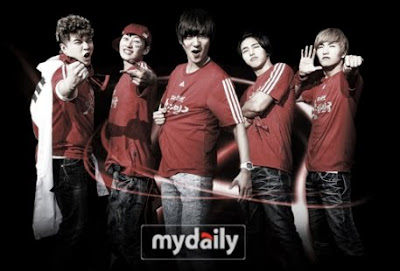 Popular idol group Super Junior to reveal a World Cup Song to cheer the S.Korean team on for the upcoming World Cup.
Super Junior members Lee Teuk, ShinDong, EunHyuk, YeSung and SungMin will come together for a World Cup song ‘Victory Korea’ and a teaser video to the song has been revealed.
Instead of the usual cheer of ‘대한민국 (DaeHanMinGook)’, they will use the cheer of ‘우리민족(Our Nation/WooRiMinJok)’ in the World Cup cheer song. The song is an electronic dance song with dynamic electric sounds.

According to an official of Irocks Entertainment (아이록스 엔터테인먼트), the company which produced this world cup song, the song will be released as an album together with the official screening of movie ‘Dreams Come True’ on 27th May.
Meanwhile, the full song will be revealed on 20th May online, and will be available offline from early June.