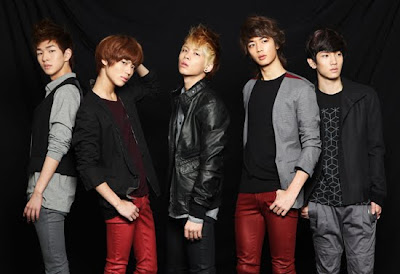 Another example is set in kpop to remind us that the kpop idol stars are just humans like us, and that they need to use the bathroom, pick noses, and etc. Looks like out next victim was SHINee’s Key as a whole series pictures of “picking his nose” is displayed on ‘Star Golden Bell.’ Also TaeMin’s proposal?

Go under the cut for Key’s “explaination” & TaeMin’s proposal & More funny cuts of SHINee on SGB!

On the airing of ‘Star Golden Bell’ on the 24th, Key fell into shock mode while the rest of SHINee members went into a laughing hysteria. The reasons? The pictures of Key’s fingers around his nose area. Here is Key’s straight forward explaination on the matters:

When the MCs asked Key what was happening in the picture, Key frantically replied by saying, “It isn’t like it is deep in there!” He also added, “For most people you need to put in it the nose to pick the nose, but in those pictures my hand isn’t fully in there.”

2) [Point to the area around his nose] “For me, these areas are itchy!”

Key quickly added on further by saying, while pointing around his nose, “For me, these areas are itchy!”

Eventually, he ended the controversy with the statement toward the watchers:

“To all of the worldly watchers, Shinee’s Key doesn’t not pick his nose often and I’m just itching [Points to the area below his nose]“

TaeMin revealed a secret fantasy towards a star from everyone’s favorite wizard movie, “Harry Potter.” And the lucky girl turns out to be other than Emma Watson. Of course, requested by the MCs was a video message for her:

“Hello I’m feverously watching Harry Potter and I’m a fan, I love you!”

Then in English so that she can understand: “Hi! I love you!”