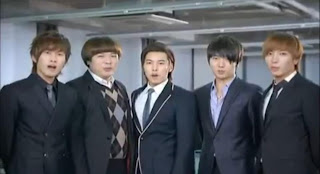 Previously , I have posted about the Send Bill Song that , the good kiddie , Lee Sung Min composed for his dad's company . The song is pretty catchy and great thought it's quite short . Unexpectedly , a Send Bill CF is released today ! I was quite shocked when i saw this , I didn't expect they would make a CF ! Anyway , some Super Junior's members starred inside the CF . Eager to know who was in the CF ? How do the CF look like ? Check Out the Video BELOW !