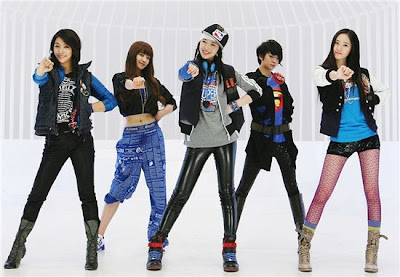 Korean pop group f(x) is set to release a music video to their new single "Chu~♡" today, according to their agency on Friday.

The music video will be available on various Internet video-sharing sites including the group's official website (http://fx.smtown.com), SM Entertainment said in a press release.

The video, which was filmed last month on a set near Seoul, was directed by contemporary music video director Cho Soo-hyun, who has worked idol group Super Junior for their hit song "It's You".

f(x), one of the newest idol groups in Korea, debuted in September with digital single "LA chA TA" and recently released "Chocolate Love" as part of their activities to promote LG CYON's New Chocolate Phone.

The group will be performing "Chu~♡" for the first time today on KBS "Music Bank".

Their first single album is set for release in Korea on November 9.