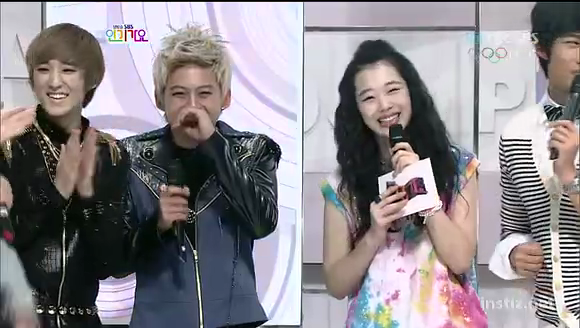 As you know,f(x)'s Sulli debuted as an MC on Inkigayo today and she was welcome by her new partners Woo Young and Taecyeon!

This is the first time Sulli interviewing guests on the show and U-Kiss was interviewed on the show today.The boys made their comeback with "Round & Round" on the show.

During the interview,MC Taecyeon and Woo Young mentioned that U-Kiss' Dong Ho and Sulli are of the same age,they were asked to shake each others' hands .

Dong Ho was so embarrased and shy and he nearly forgotten what he should say,such a cute scene,you should watch the video below to find out!!