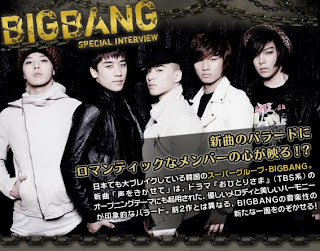 -Have your thoughts on Japan changed much since you’ve started coming often?
DaeSung: Recently, we’ve had to stay here a lot so its becoming really familiar to us. When we’re in Japan we can rest on our days off more than when we’re in Korea, so its good. We shop for clothes or go sightseeing so sometimes we’re more tired than when we’re working! (*laughs*)
TOP: When we come to Japan, there’s lots of yummy food so it always feels like we’re eating something. (*laughs*) I like nearly all Japanese food, but I cant eat “umeboshi” (its like sliced plum preserved in soy sauce and pepper paste), I just can’t eat that! They say its good for your health…but I just can’t get used to it.

-Your new single “Let Me Hear Your Voice” is a heart-warming ballad. The lyrics are really romantic too, what parts of the song touched everyone’s hearts?
TaeYang: I like the title itself of “Let Me Hear Your Voice” When we sing the chorus, we combine with the orchestra and it feels great! I hope people think about that when they hear the song.
GD: The song itself is a ballad but the tempo and the impression kind of changes when the rap comes in, making it a more BigBang-ish song. The point to notice is that its not just a fully romantic song.
TOP: In the English rap, there’s this part that goes “In time my love unfurls”. I think it’s a really beautiful expression so I really like it.
VI I like the line “朝は苦手な君だからねえ, 毎日ちゃんと起きられてるかい？” (You’re not a morning person, Are you getting up well in the mornings?). I think that everyone’s had that kind of experience secretly thinking of a person who was once special to you. ….Me? I’ve never had that experience because I like girls who aren’t tired in the mornings.
[nooo ri don’t say that!! ..I can change =p ]

-Haha. So who do you think is the most romantic member of Big Bang, like in the lyrics?
TOP: Everyone’s quite the Romantic. But then again we’re close and everything but we’ve never dated each other so we wouldn’t really know..*laughs* If we had to choose one person, maybe TaeYang? To tell the truth YB sang a song for me yesterday at my birthday party. My heart thumped pretty hard, it nearly melted. *laughs*

-“Teddy” has been contributing to a lot of your songs, whether it be producing or composing, what kind of person is Teddy to you?
TaeYang: He’s a company sunbae to us, and the leader of a very popular group in Korea. We grew up listening to his music so we were influence quite a lot by him.
GD: He’s truly a great person, we really respect him. If possible we want to become closer to him but since he’s such a mighty person to us, its hard for us to try to be friendly to him first. *laughs*

-I’m sure you’ve met lots of Japanese fans, were there any weird or embarrassing gifts?
GD: I got a model gun at the airport. I didn’t open it though and got really surprised when it caught at the airport gates!
TOP: I got underwear that had an elephant trunk dangling off it! I didn’t know what to do… Whether I wore it or not is a secret. *laughs*

-What gifts made you happy?
TaeYang: Well we like all presents from fans, but when we get presents we like from fans who know our tastes, its great. We treat all our gifts really preciously, we’re always thankful.

CREDITS: http://bbflow.cafe24.com/bbs/view.php?id=n...=asc&no=890 , sjay.x@BBVIP Forum
Note this translation may not be perfect as it's translated from a korean translation to english !
Tags: Big bang
Share
Previous articleNext article