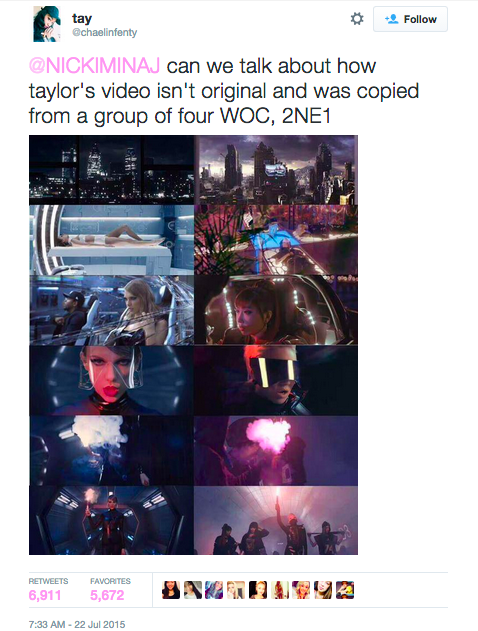 An article from Billboard features a plagiarism accusation on how Taylor Swift's MV for 'Bad Blood' bears similarities to 2NE1's "Come Back Home" MV.

A screencapture collage of the striking similarities of some scenes from both MVs circulated on SNS and has reached the "Bad Blood" MV director Joseph Kahn, who obviously isn't happy on what's brought up.

"I don't know what's going on right now. I just make videos." and "The fact none of you realize the flare-hallway sequence in BAD BLOOD is from ALIEN 3 disappoints me. Fincher FTW."

Then he makes his point to rebut the accusation by, "If you hit me with in head with a bottle of kimchi I wouldn't know a single Kpop song in the last 5 years. Too busy listening to Anaconda," implying that he hasn't had any idea of 2NE1 song and is impossible to rip idea off the MV. He also hits back that the similarities pointed out my netizens are not unique.

"FYI: city, car, futuristic masks, body scanning. These are common SCI FI TROPES. Flare from Alien 3. Also, stop recropping to match shots." Trying to be witty amidst the heated argument againts kpop fans, he tweeted a photo of BEAST's topless image with the caption, "#TBT me and my crew with our shirts off directing BAD BLOOD music video"

Lastly, he gives some advice to KPOP fans,

"The nicest thing about pissing off some Kpop fans is they don't call me chink or faggot, like Lil Monsters do. So there's that."

"Cool that Kpop is loved. I don't follow because I'm busy & have lots of demands on my time so don't be offended. I joke a lot on twitter."

"I work in Asia a lot & Asians are good people. So I trust many of you Kpop fans to be more sensible and less immature. Carry on. Thanks."

He further denies the accusations by mentioning some of his MV inspirations, "Tracking outside to inside was opening of Toxic, which was from my Janet Jackson Doesn't Really Matter, which was from Citizen Kane."

"The reality is if anything a lot of videos in the last 15 years use shots/techniques from me, including Kpop. That's some Kanye tweet right?" , "And I'm officially done talking about this."


Meanwhile, the discussion about Director Joseph Khan plagiarizing 2NE1's MV has been raised in the midst of Taylor and Nicki's SNS feud over the latter's disappointment for being not nominated for 2015 MTV VMAs.