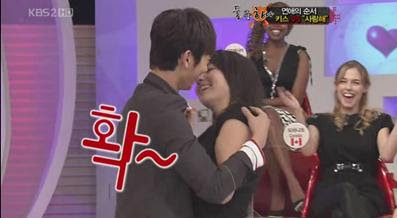 2AM member Jo Kwon almost(?) got his first kiss stolen.

Jo Kwon, who made a guest appearance in the KBS 'Global Beauty Talk Show' (Misuda), confessed that he had never kissed before, while talking about first kisses.

Following this, MC Nam Hee Suk suggested that the American beauty Bianca, who claimed(?) that she had also never been kissed, and Jo Kwon to do an enactment of a kiss scene.

At this, Bianca suggested, "Should I lead" and stood in front of Jo Kwon while Jo Kwon didn't know what to do, making everyone laugh around them. Then, Bianca suddenly brought her lips close to Jo Kwon making him startled at the move.

At Bianca's forwardness, the studio burst into laughter. Afterwards, Jo Kwon expressed, "From closer view, Bianca is really fine", bringing on another round of laughter.