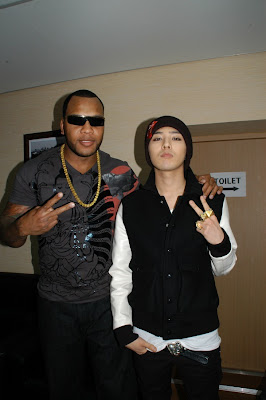 Yesterday was the last day of Flo Rida's first concert at South Korea and it also staged probably the hottest collaboration from epic rappers.

G-Dragon is no the person you mess with, because just when people started to slap him with plagiarism controversies he remade heartbreaker and featured the singer he was "accused" of plagiarizing. Talk about irony!

On his shine a light album, he release the remake version where Flo Rida was featured and Yesterday, G-dragon was the guest and yes~ they performed together! It was awesome, G-Dragon was very cool the whole time.

Flo Rida even tweeted that he had a great time in South Korea with G-Dragon (check his twitter account @real_flo i think) and GD chills with Flo Rida backstage. The photo oozes with awesomeness dont ya think?

thats YG BABY~ for you~ for those who haven't seen it yet. check this: