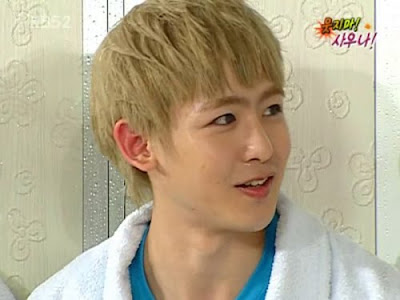 2PM's Nichkhun revealed Wooyoung as the member who cried the most during trainee days.

On the 20th on 'Happy Together', when asked who cried the most during trainee days, Nichkhun replied "Wooyoung cried the most". Junho said "In those days everyone did bad so we got punished a lot."

Nichkhun started to get too talkative when he said "Whenever Park Jin Young punished me, he told me off in english so it wasn't as serious as the others."

When asked about whether they got told off a lot when preparing for their album, Junho answered "Park Jin Young's goal this year is to not get angry", "He said he'll even pour water for us ."

May be taken out with full credits. You are not allowed to add yourself to the credits nor edit the credits.
CREDITS: NATE (SOURCE) ; jennying♥@2ONEDAY.COM (TRANS)
Tags: 2pm, News, Nich khun, Woo y
Share
Previous articleNext article