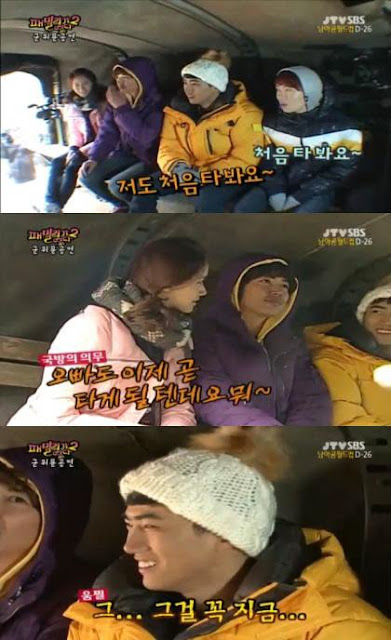 On this day's episode, it showed the family's struggles to arrange a morale-boosting concert for the navy unit, who said that there hasn't been a concert for them during the 63 years inwhich they were operating. Especially on this episode, a question that was related with the military was directed at Ok Taecyeon, making him flushed, garnered attention from viewers.

The family became excited upon riding a military truck for the first time to be transported to the navy unit. Ok Taecyeon and JoKwon, with the other family members, scrutinized the truck with curious eyes, saying "Really, I've never rode this before".

During this process, Yoona made a surprise statement towards Ok Taecyeon and JoKwon, saying "You oppas are going to ride it soon anyway". At this, Ok Taecyeon stuttered, "You really have to (mention) this now..." and was unable to finish the sentence.

May be taken out with full credits. You are not allowed add yourself to the credits nor edit the credits.
CREDITS : Nate (SOURCE); JinaStar@2ONEDAY.COM (TRANS)
Tags: 2pm, News, Taecyeon
Share
Previous articleNext article