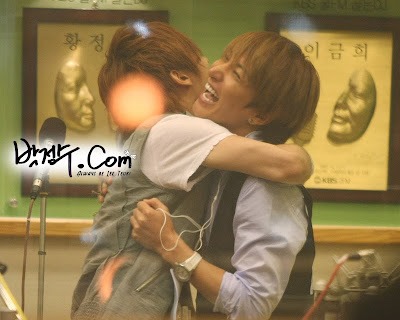 KTR’s Welcomes It’s New Autumn Format
It is well known that the popular group, Super Junior, earns a lot of money, but the 2 DJs have never treated the KTR production team to a meal. It has even been said that in during March, Leeteuk made the writer wash his own pillow, is this true?
Leeteuk: Actually, it’s because we are too busy……
Questioner: Just tell us if it is true.
Leeteuk: It’s true……
Questioner: Awhile ago, Eunhyuk went to Paris and brought back some small gifts, it was said that the production team, after receiving them, burst into tears. Previously, how petty were the both of you to make them so touched that they cried, just by receiving such a small gift. From today onwards, are you going to treat them to a meal?
Eunhyuk: We planned to treat them a few times, after the recording ended, but each time, the writers would say they had already eaten…… so we had no choice.
Questioner: Leeteuk, do you want to defend yourself?
Leeteuk: I’ve been waiting for the day when they change the format, I’ve been waiting for the day we can have a meal with our new PD and writers.
Questioner: The previous PD and the writers have all heard this before……

It has been said that Eunhyuk pays attention to who is the female guest for the day, is it true?
Eunhyuk: It’s not true, it’s not true
Questioner: Be truthful.
Eunhyuk: Yeah, that’s right, of course it is important who the female guest is.
Questioner: Who makes your heart beat the most?
Eunhyuk: Of course it’s Lee Soo Young. (The guest that is doing the questioning is Lee Soo Young)
Questioner: Stop saying nonsense. Instead, say which group makes your heart beat the most.
Eunhyuk: I often say this in programs, the solo hoobae that I really like, is IU.
Leeteuk: High school student, high school student.
Eunhyuk: I say it truthfully every time.
Questioner: It has been said, that you use the excuse of being a fixed guest, to constantly ask female guests for their phone numbers, is it true?
Eunhyuk: This is really not true……
Questioner: Leeteuk shall answer.
Leeteuk: It’s true.
Questioner: Using this method, how many people have you managed to attract? Be honest.
Eunhyuk: About two or three……
Questioner: It has also been said that Leeteuk has been very attentive to female hoobaes.
Leeteuk: I really didn’t (do that)
Questioner: From today onwards, you cannot be biased to female hoobaes, you have to treat others fairly.

KTR would often play English songs, but each time, when it comes to introducing the song, Leeteuk would always say, “Eunhyuk, please introduce the name of the next song.” Using these methods to avoid speaking English, is it true?
Leeteuk: It’s not true, I’m just giving way to Eunhyuk.
Questioner: Then promise right now, that from now on, you will introduce the names of the English songs.
Leeteuk: I do not promise……
Eunhyuk: This person’s English is very simple and short, if you don’t believe me, let’s have an exchange with Amber to listen.
Leeteuk: Nice to meet you*
Amber: Nice to meet you too. How are you today?*
Leeteuk: Yes…… I’m fine…… Yes, bye bye……*
Amber: What did you eat today?*
Leeteuk: (In Japanese) Thank you.
Eunhyuk: Hahaha…… Leeteuk really doesn’t introduce the names of English songs, once there is English, he would secretly let me do the introductions.
Questioner: Really sly.

*Note: The words in Italics were said in English.

Through Bora, we can often see the two of you eating and quarreling at the same time. Are the two of you elementary school students? Quarreling all the time just because of a little bit of food, that’s very stingy.
Eunhyuk: He’s very stingy. When I ask him what he wants to order, he always commands me to do something, or he’ll wait for me to do it and then tell me what he wants. He’s always like this, like an elementary school student, and he’s already a 27 year old person.
Questioner: Is this true?
Leeteuk: No, it’s not true. Actually, Eunhyuk is worse. I asked him for a piece of biscuit, if he wanted to give it, he should just give the entire thing, but he always breaks it and gives me a tiny piece.
Eunhyuk: I admit…… In future, if we have anything, we’ll share it……

It has been said that during the Bora, both of you are not looking at the listeners’ messages, instead you are taking care of your own cyworlds, or looking at news about other celebrities. Is this really true? As a DJ, how can you be like this……
Leeteuk: We only look at the messages.
Eunhyuk: It’s because of you that we are misunderstood. Leeteuk occasionally goes into his own cyworld, and on his storyroom, he would write “Now is KTR’s Bora time……” The back of our computer faces the camera; Leeteuk has secretly seen goodness knows how many photos of young female idols.
Leeteuk: When have I seen them…… you’re wronging me, how can you not tell the truth.
Questioner: Does he mainly look at actresses or singers?
Eunhyuk: his range is quite broad, heheheh.

Both of you have been doing KTR up to now, have you received any confessions from female guests?
Eunhyuk: I haven’t.
Questioner: That means you have confessed before.
Leeteuk: Eunhyuk is very skilled in this sort of things, if he were to take out his handphone to ask someone for their number, it can be seen on camera, so he records the number on our script……
Eunhyuk: What the person is asking is if we have received any confessions.
Leeteuk: During bora, someone ever confessed to me. She kept staring at me, and if I looked at her, her face would turn red.
Eunhyuk: She said Leeteuk appeared in her dreams, and while dreaming, she liked him. She has a boyfriend, but she still likes Leeteuk.
Leeteuk: I am too popular.
Source: Kimseohye