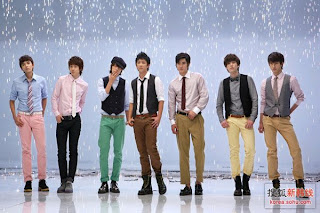 Sohu will release an official MV of 《Blue Tomorrow》 tomorrow on November 7 in South Korea, Mainland China and Taiwan.

《Blue Tomorrow》 is a ballad song included in the track list of the recently released mini-album of SJ-M, which is also favored by most fans beside their hit song 《Super Girl》.

《Blue Tomorrow》tells a story about lovers who still have feelings for each other despite the fact that their relationship has ended. With the sad lyrics, Super Junior – M members have touched fans’ hearts as they gave an emotional touch in their acting, especially HanGeng who shed tears of sorrow in one of the scenes.

The MV is expected to be released through SM Official Website, leading portal sites such as Sohu.com and mainstream news media.