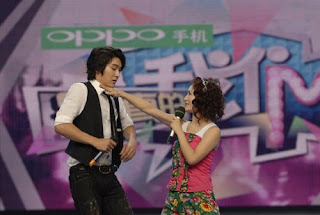 In “Happy Camp”, SJ-M and the host had close interaction, creating chemsitry between them. Xie Na’s (host) daring action caused Siwon to get a big shock. On the other hand, Hankyung revealed that he has plans to get married in 5 years time. Shocking news revealed, endless fun moments.

Because of the rare opportunity to meet SJ-M, the recent screening of “Happy Camp” allowed fans to admit that there’s so much benefits for them. Also, SJ-M’s recent exceptionally wonderful CF photoshoot photos caused fans to drool* and gasp with admiration. Observant fans also noticed that the mysterious woman in “Happy Camp”, Kim Min Ji, was actually SJ-M’s latest OPPO handphone CF female lead! Futhermore, with reliable resources, the OPPO CF will be different from other normal handphone CF that is usually screened on the TV. It will be chosen to be released at the end of october on the internet.