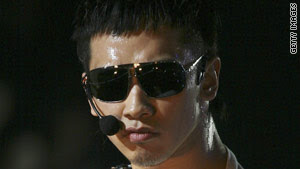 (CNN) -- He's gone from being a backup dancer to the biggest thing in Asian pop culture, an actor and singer who has sold millions of albums.

The 27-year-old South Korean has even faced down U.S. comedian Steven Colbert in a spoof dance-off.

The comedy skit came about after Rain placed higher than him in Time Magazine's 2008 online poll of the 100 Most Influential People.

As well as a sense of humor and dance moves that shook Colbert out of his satirical posture to praise, Rain is also known as one of the hardest working men in the entertainment business.

He made his first mark in Hollywood last year with a role in "Speed Racer" appearing alongside Christina Ricci and Matthew Fox.

As a singer with five albums to his name, he's faced thousands of screaming fans at concerts across the world, and recently he faced your questions. Watch the show on October 28 and find out what makes Rain tick.