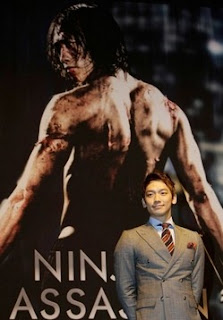 SEOUL, South Korea — South Korean pop star Rain says he drew inspiration from fellow Asian stars who successfully crossed over to Hollywood when he prepared for his first leading role in an American film.
Advertisement

"I watched a lot of action films of Bruce Lee and Jackie Chan to create a different, unique character in the movie," the 27-year-old actor-singer said Monday at a press conference in his home country to promote "Ninja Assassin."

Jeong Ji-hoon, who goes by his stage name Rain, was first recognized in the region for his singing and slick dance moves. He first gained exposure in the West when Stephen Colbert parodied one of his music videos on his show, "The Colbert Report," in May 2007, which led to a second spoof — a "dance-off" with the U.S. comedian. He made his Hollywood debut alongside Emile Hirsch in Andy and Larry Wachowski's 2008 thriller "Speed Racer."

In "Ninja Assassin," Rain plays an orphan adopted and trained into a deadly assassin by the secret society Ozunu Clan, only to turn against it when he finds out that the group's leader executed his friend.

"Speed Racer" posted mediocre box office numbers and all eyes are on whether Rain can carry "Ninja Assassin," which will hit theaters on Nov. 25.

The South Korean star said for now, he's just glad if he can pave the way for more Asian faces in Hollywood.

"I hope the movie reaches the No. 1 at the box office, but regardless of the numbers, it will open doors for more opportunities in Hollywood not only for myself but for other Asian actors," he said.

Rain was equally grateful to the Wachowskis, saying Monday meeting them was "one of the life-changing experiences in my life."