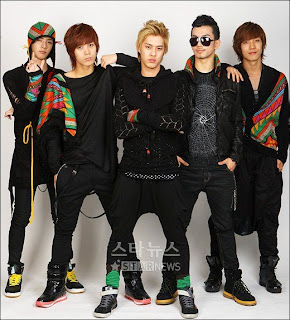 What are the five guys like in real life?
As I give them a pen and paper and ask them to write about the other four members’ real personality, laughter bursts out here and there – “Hehehe”.
“You have to write really honestly and well.”

Leader Seungho gently threatens the other members to write about him nicely. However, Seungho’s request is instantly thrown into the air and broken into pieces. And without a moment’s hesitation, the members’ exposés began.
“Joonie, you really need to wash.”, “What, so we’re really going to go all out like this?”
The members’ pleasant back and forth of attack and defence started. The following is a summary of the members’ words from pen and mouth, a refreshingly honest view of MBLAQ from MBLAQ.

Seungho, “All-round man” but “dark circles”…
Seungho gets called “Docile daddy” by the others members. He is good at fixing machines, and can fix any problem related to electricity, so he is called the “All-round man”. When a problem arises, he immediately rises up as spokesman and doesn’t hesitate as an “honourable man”. He really seems like a typical gruff blood-type B guy, but when the conversation starts he can turn into a “chatty guy”. Also, his nerves can get sharpened [i.e. gets annoyed easily] when he can’t eat at the right times. He is really alike to his mentor Rain.


However, he also has abundant sensitivity. His piano playing skills are also at a high level. He can also perform card tricks. But Mir is slightly worried about Seungho’s dark circles. “I hope they don’t get any bigger…”

G.O, “Hair-glass”? In reality is a “spotless guy”
He is the deputy of the group. His nickname “Hair-glass” comes from a combination of his beard (털[teol]=hair) and his trademark sunglasses. Despite his serious appearance, he is a skillful talker. His outer appearance is very manly but his insides are more sensitive than most and he is very considerate of others. He has experience of cooking for himself so his cooking skills are quite good. But his “tidy-disease” is tear-inducing for other members.
“He takes one hour to shower. So the people after him fall asleep waiting. He is a guy that loves his own skin.” (Lee Joon)

Lee Joon, the truth about “Fourth dimension” and “Dirty guy”?
On stage, he is the member who most resembles Rain. However, he is MBLAQ’s official “fourth dimension” [fourth dimension= somewhat eccentric]. From head to toe. Sometimes he comes out with absurd comments like “In the depths of the water there live squid the size of the 63 Building”.
Further, the members have picked him as the “person who washes the least”. It is the opposite of his clean image.
“We wish he would wash a bit.” (Mir, G.O)
But his body is top grade. But he is addicted to exercising. His hobby is exercising in the early morning.

Cheondung, “Sweet guy” but “terrible” at gags
Out of MBLAQ, he is the unique “good-looking young guy”. His nickname is “DoongDoong”, from his name. He is very nice and beautiful, but has a bit of “Prince Syndrome” [=a bit up himself]. He wears unbearably cute pyjamas at their house. He is also the odd one out in everything.
The most serious problem is his gag skills. His humour is really no good.
“I would like him to develop his gag/comedic skills.” (Mir)

Mir, “Atmosphere maker” but also “mischief maker”
The team’s youngest is the “atmosphere maker”. He occasionally hears that he looks like FT Island’s Lee Hongki. He also has the nickname “Chucky” that Cheondung made up for him. The reason is because they look alike. His gag skills are excellent but he can also be the “mischief maker”. In the team, he and Lee Joon are the unmatched masters of not washing.
“He is very satisfied about showing people his dirty/unclean side.” (Lee Joon)