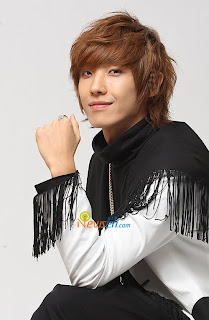 "My heart is pounding like crazy because it's only a month until the release", Lee Joon confessed. He also said that all he can remember whilst filming with Rain in Germany was being in pain and suffering, but he was happy when he saw the completed film a few days ago. He had waited for the past year for the release since filming ended.

Whilst Rain was making his 'Godly Body' with 0% fat, Lee Joon spent those times with him. He tried his best at training in order to portray the younger version of Rain well. From the 6-stage auditions and the weight training to the martial arts training, he didn't have an easy time. The pain that he suffers whilst dancing on stage is also from those times.

"The weight and martial arts training were the most difficult. But I was able to follow a normal dietry pattern whilst Jihoon hyung had to follow a strict diet routine along with training, thus it'll have been harder for him. The martial arts training is one of the worst ordeals that I had to go through. I only had two 'action' scenes whilst Jihoon hyung had at least half the movie doing them, so it must have been hard for him."

He pointed at his nose, explaining that there's a bone which broke. He also pointed at his elbows saying that it still hurts from when he hurt himself there whilst training. But he didn't stop smiling. This was because the end result was good.

The other members saw the movie with him. They described Rain and Joon as 'cool'. Even though it'd be understandable to show a little bit of jealousy as he debuted in Hollywood before them, despite the fact that they trained together, they just patted him on the back and told him they enjoyed it. Their teamwork was better than expected, especially considering the fact that they were newly-formed.