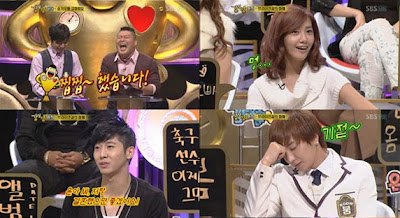 SNSD's Yoona revealed a rather oddly romantic history between her and Super Junior's Leeteuk.

On today's episode of Strong Heart (Kang Shim Kang), while talking about the love chemistry between Lee Seung Gi and Yoona, Yoona reavealed that one of the male guests on the show has told her to get married to him before.

When people became very shocked, she said, "He's been asking me. Whenever he sees me he says, 'You have to get married to oppa.' He says this on the phone and in person!" Then, quick eyed Brian said confidently, "Look, it's Leeteuk! I was watching him. While everyone was looking around trying to figure out who it was, he was sitting there laughing to himself," and proceeded to do a hilarious imitation of Leeteuk's cackle.

Since Yoona and Leeteuk's trainee days at SM Entertainment, Leeteuk had always told Yoona to get married to him. That's 7 years of Leeteuk wanting Yoona as his wife! Of course, it's a practical joke between the two close friends but when Leeteuk was 20, he was attracted to a 13-year-old Yoona. Not creepy at all.

On a side note, throughout the whole story, Seung Gi played along very nicely, giving off his false anger vibe causing the cast to crack up.

As Yoona made Leeteuk look like the man breaking Lee Seung Gi and Yoona up, he admitted, "Yes, Yoona is my ideal type," with no hesitation. I must admit, Yoona is one lucky girl. Every single man on the planet has picked her as their ideal type. Leeteuk, Lee Seung Gi, Nichkhun, and more!

As Leeteuk was confessing, he said "Yes, I have said that to Yoona. But here is why. Before debuting, Yoona would always text and call me asking if she would make it one day. She was always worried about becoming a star. After debuting, she became busy, but she still called me, crying, because she was so worn out and tired from the busy schedule. So I thought, maybe she likes me!"

A bit later, Brian decided he had to get in on the action and admitted that Yoona was his ideal type as well. When questioned about his having a girlfriend already, Brian quickly answered, "We broke up." He then went on the say that he would make Yoona his girl when Leeteuk got up and covered her ears Kim Jong Kook - Yoon Eun Hye style.

The entire episode was filled with hilarity from Boom's Genie parody to Tiffany showing off her smiling eyes.