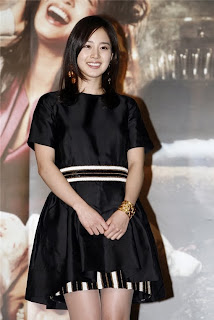 Kim Tae Hee who had extended her one year contract with 'Paris Baguette' had filmed the CF on the 11th with 2PM at a studio in Kangnam. Kim Tae Hee, who had also recently filmed a cellphone CF with Big Bang, had paired up this time with the hot bodied 2PM and had expressed the sweet taste of bread.

The advertising company stated, "We wanted to show Kim Tae Hee's cute liveliness along with 2PM's strong manliness" and added, "Kim Tae Hee and 2PM had enjoyed filming the CF together with
no awkwardness at all"