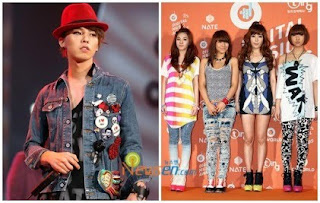 G-Dragon and 2NE1 have been nominated for the 24th Golden Disk Awards.

G-Dragon is nominated under the best Disk category for ‘Heartbreaker’ as well as for the Samsung Yepp popularity award.

2NE1 is nominated for best Digital song for ‘Fire’ and ‘I Don’t Care’, the Samsung Yepp popularity award and Samsung Yepp newcomer award.

This annual music award will be held coming 10th December.