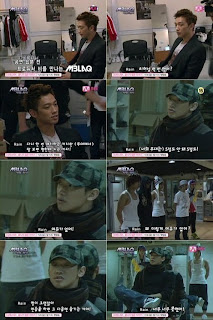 It's no other than MBLAQ's world famous mentor, Rain!

World star Rain showed off his force as a boss.

Rain first released 5 male group MBLAQ produced by himself at his concert last October 9th, after this, MBLAQ really began working as a singer starting with their first airing on October 15th.

During this program before and after his concert, Rain showed his delicate attention, giving encouragement to MBLAQ, "If you see the ground, you'll be completely defeated by me", which attracted attention.

But, he seemed to have turned completely about them after their first airing.

Rain smacked down MBLAQ who got so nervous they froze up just by being told as, "Rain is here", by saying, "I'll give you a score of less than 5 points out of 10." "I was so anxious all the way through your appearance on stage." "You have no breadth of mind." "Most people don't know how I've taught you." "You were extremely poor performers."

When shown the program, Rain received an enthusiastic response by the viewers.

"Rain properly created an atmosphere of a boss." "Such attitude is like Rain." "Rain with his calm attitude and scare force is so cool."

Meanwhile, MBLAQ was charged with the mission that they should invite celebrities such as actor 'Lee Byung-Heon', actress 'Jeon Ji-Hyun', singer 'Tiger JK', and novelist 'Lee Woi-Soo'. to his own fan meeting offered by the program of Mnet TV.