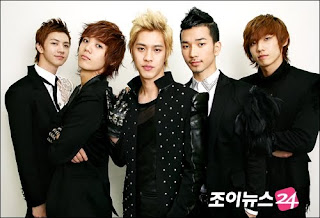 'Chiq Idol MBLAQ: An interview carried out with their nicknames'

New 5-member boy band MBLAQ. They are not normal from their looks. With their dark, smoky make-up, black clothes, sexy concept involving the show of abs, they also have the charismatic, powerful dancing skills.

So the fans call MBLAQ 'Chic Idols'. From 'Beastly Idols' and 'Vegetarian', this new nickname is also humorous.

Even though it's been only 2 weeks since debut, the fans are already busy giving nicknames. The MBLAQ members also find this fun and interesting. And of course, they have a lot to say about it.

They are so chatty that the name 'Chic Idol' doesn't suit them. Let's look at them one by one as we get to know them better.

He became the leader due to being the oldest. And he shows his leader-like quality by covering up everything that the other members say.

How did you get the nicname 'Yang Samjoo' and 'Way Ahead of time Seungho' ?
"A few days ago on a radio show, I made the mistake of saying that it had been 3 weeks since we debuted, instead of 3 days. So the fans gave me a nickname of 'Yang Samjoo' (T/N Yang 'Three weeks'. 'Sam' means three and 'Joo' means week.), and I really like it. (the members were happy because it was a good nickname). And please put this in the article: I was considering Rain hyung's concert as well, so I thought it'd be three weeks (laughter)... But I think I was so nervous that i miscalculated the time.

Opposed to his perhaps scary (?) first impression, he has a good sense of humour. Along with the youngest Mir, he makes everyone laugh. He also acts as an agony uncle to Seungho as they are the same age.

The nickname 'Teol Glass' is unique. And why do you wear sunglasses all the time?
"The nickname came because of my beard and sunglasses. Because the other members are 'flower boys', I wanted to be different so I kept wearing sunglasses, but I keeping looking like Michael (T/N He is a character from the Korean children's show "Dooly"). The fans keep telling me that I look cuter without the sunglasses. As I wear sunglasses and dance at the same time, my attention keeps going to that. I'm going to perform without them from now on."

Any episodes regarding the beard?
"I debuted as a member of TYKEYS, but that didn't work out well. So I went to audition at a company which seemed the most reliable. I was growing a beard at that time, but Rain told me to shave then come back, so I did it. He thought that I looked OK without the beard, but told me at a later date to grow it back again, so this has resulted in how I look right now. I don't have any thoughts in shaving just yet." (Kim Taewoo had recently told their manager that G.O. has a similar feel to him, so he felt happy).

He has a good body. He introduced himself as 'MBLAQ's muscles'. He looks like Rain. The way that he moves on stage is like Rain, so his nickname is "Baby Fox".

You must have been at an advantage at the audition because you looked like Rain.
"I followed a dongsaeng (T/N A younger person) to an audition, seeing as I was bored. Because the auditions were already at its 2nd, 3rd stage, I didn't have faith that I'd get in. I was just in awe because I got to see Jihoon hyung, but people told me to audition. I got in at once. Jihoon was initially reluctant to choose me, but he liked the way that I smiled."

"I get told that I look like Rain a lot, but Jihoon hyung is so much better looking. Even though we don't appear similar, foreigners just assume that we look the same. It's a real honour to be told that I look like my idol." (The members say that they sometimes get confused between Rain and Lee Joon.)

Your debut movie is going to Hollywood. How do you feel towards the release of 'Ninja Assassin"?
"I saw the film, and it came out as I expected it to be. In the case of Jihoon hyung, the film reflects on everything that he had to go through. Action movies destress me. It's a good action movie."

He went to the Phillipines when he was 4 and came back to Korea 2 years ago. Despite spending a long time abroad, his wide vocabulary amazes the other members. He is kind and gentle. They call Chundoong 'an angel without wings'.

You are an issue at the moment due to your sister being Sandara Park
"It's good that my sister is a singer. It's been ages since I saw the other family members, but I get to see her in the broadcasting company building. Because I'm with my sister, I'm more comfortable and light-hearted about everything. I hope that 2NE1 and MBLAQ succeed together."

A sudden questions from the members. They ask who he would choose if 2NE1 and MBLAQ were both up for the #1 spot.
"Mm... I don't mind. I feel bad for saying this, but I wouldn't mind if I lost."

He is bright and cute like the youngest. He opens the sunroof of the car in order to wave to the fans, and replies to every single one of the fans' posts. He is the one to look forward to.

You are the youngest, but your nickname is the most mature(?)
"When I dance on stage, that part always gets exposed. That's why I have those nicknames. Whilst the hyungs get nice photos, I get captures with weird expressions or something with nipples in it. They say that I never fail to disappoint. I think it's a unique and fun nickname.

Your sister is the actress Go Eunah.
"My sister isn't a top star... (laughter). When I went to eat with the people from her entertainment company, a director told me to act. But I failed. Being a singer had more appeal for me than being an actor. My family members opposed my decision in the beginning but the CEO (he's also my brother-in-law) told me that if I have the confidence not to bring shame to Jihoon hyung and my sister, then go for it. Because my sister is also a celebrity, I go to her for guidance when I'm low and she encourages me a lot too, which is good."

Credits: BLAQ'n'white@MBAforums (translation), Joynews (source)
DO NOT TAKE OUT WITHOUT CREDITS AND PERMISSION!