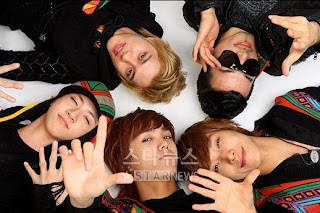 MBLAQ reality show ‘The Art of Seduction’, double the audience – ‘A big hit’

Last Wednesday on the 4th at 6pm Mnet, MBLAQ aired their first program ‘MBLAQ The Art of Seduction’ through Mnet’ with a 0.9% record audience and it achieved the highest rating of all aired programs to be recorded. The average rating for cable programs are 0.4% but this has achieved rating from audiences two times higher than the average.

Also, at 8pm on the 5th of November, the rerun of Mnet’s representative program, ‘Mnet Wide News’ had a similar audience rating of 0.6%. In addition to this, the views of the program online has reached 20 000 during the past six days which reflect the interest people show towards them.

It was not considered that this idol group would not have passed the average audience rating on the cable TV reality program, and this shows off an interesting start.

‘MBLAQ The Art of Seduction’ is a reality program introduces each of the members with their first stage, and focuses on the process of their debut. The program is broadcasted every Wednesday at 6pm and reruns three times during the week.