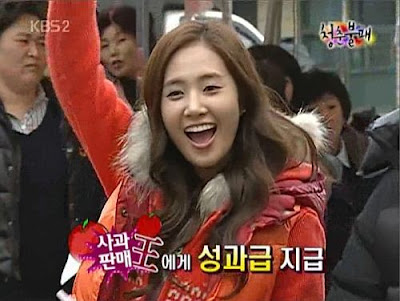 SNSD’s Yuri gained the most popularity out of the seven girl group members in the KBS2 variety program ‘Invincible Youth.’

The girls opened the signing event to sell 3 boxes of apples at KangWonDo HongChun. 4 Minute’s Hyuna was unable to attend due to a cold.

In the midst of disarray they became aware the rivalry between them, Narsha attracted people with Brown Eyed Girls’ famous ‘Impudent Dance’ (Abracadabra) and T-Ara’s Hyomin gave people a laugh by saying that she would visit people’s homes to sign.

On this broadcast they sold off some of their personal items that they usually cherish so much.