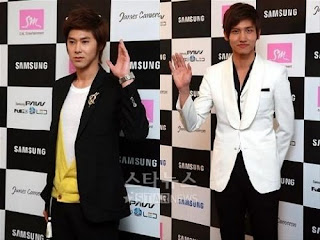 On the 14th of this month, Samsung Electronics held a 3D-related press conference for

Last summer, the other three members of TVXQ brought a lawsuit against their management company regarding their contract, after this, Yunho and Changmin who stood on SM’s side never appeared in public.

TVXQ leader Yunho expressed: “3D can bring a whole new way of feeling, we will continue to work harder.” Also introduced himself as “TVXQ’s Yunho”, Changmin also emphasized he was “TVXQ’s Changmin”.

Since there is still no settlement between the other three members and SM Entertainment regarding the contract, Yunho and Changmin’s actions were praised by Korean media, because it showed the 6 years of strong love in TVXQ.