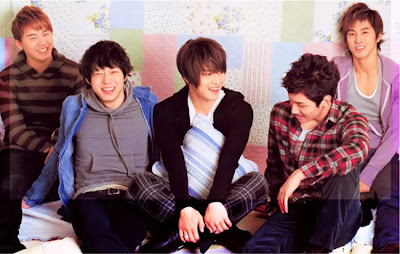 The fathers of Yunho and Changmin, the two members that have sided with SM entertainment, spoke in support of their sons and SME while condemning other three members and their parents. They claimed that the dispute has more to do with the trouble that have arisen from the beauty product business rather than contractual matters.

The two members who did not involve themselves in this legal dispute are the real victims here. They suffered from financial loss, psychological suffering and most importantly they lost their reputation. Who is to compensate them for their losses? I intend to ask the three members this: Whatever the reason, why do you intend to cause such great controversy and drive DBSK, an international brand name, into a break-up? Do you care at all about the other two members and their suffering?

The beauty product business wasn't something that was supervised by SME. On top of that, the beauty product company itself wasn't very trustworthy. When it was started, I felt that DBSK's reputation could potentially suffer from involvement with that company and advised my son of the issue. He shared my concerns as well, and that is why he did not involve himself in the business. SME later asked the three members to withdraw from the business but their parents resisted unreasonably. Mr. Shim (Changmin's father) and I tried to convince them as well but they simply refused to change their minds. I later learned that the three members took up legal actions against SME without consulting me nor Mr. Shim. DBSK is not owned by those three members only. They ignored not only the controversy that would rise but also the rights of other two members.

Simply put, the other three members took legal actions against SM because of the beauty product business matter and other reasons which involve their financial gains. What they claim as their reasons, reasons such as unfair contract and unclear profit division are merely excuses to hide the true reason behind their actions. After the three members started the beauty product business, one of the parents called me and told me shenanigans like "This business can be worth millions or even billions in the future. When we tell the media that DBSK has started a business, share price of our company will hit the roof - we will tell you in advance so you can profit from the information."

Three members claim that the contract is unfair and calculations are unclear, but my son and I have read over the contract with SM clearly and agreed to all clauses, from the very first contract through all five revisions that have been made. For every income my son has received I reviewed all of the the numbers. I feel sorry for the three members and their parents as they must know of the truth but they continue to make false claims."