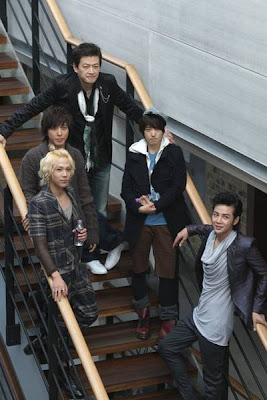 SBS’s You’re Beautiful is putting up a good fight against the blockbuster in the same time period, IRIS.

You’re Beautiful got off to a start on October 7 with a 9.2% rating (ABG Nielsen Media). However, when KBS’s IRIS premiered on the 14th, its numbers dropped to 7.5%. Considering IRIS’s hype and that its first episode rating was over 20%, this could have been predicted. As IRIS looks toward the 30% ratings mark, one suspected that You’re Beautiful would face falling ratings.

But a strange phenomenon occurred. Even with IRIS’s swift onslaught, You’re Beautiful’s ratings steadily grew. Its episode on October 29 rose to a 9% as it faced off against IRIS, which had received a top rating of 27.7%. Where did You’re Beautiful’s latent force come from?

You’re Beautiful’s secret for maintaining a safe level of popularity can be found in its solid mania viewership. As befits a drama about the growth of an idol group, the drama has plenty of appeal through casting young stars like Jang Geun-seok and Lee Hong-ki, as well as fresh faces like Jung Yong-hwa. From the makeup of the cast, mania status was understandable.

Park Shin-hye also attracted notice for her crossdressing role. As members of the fictional band A.N.JELL who sing the songs themselves, they are creating their own fandom phenomenon that resembles a real idol group. As such, it created a passionate viewer fanbase that was heavily populated by teenagers and young twentysomething women.

Also helping is the way that even with the drama’s strong sensibilities, it also has a solid structure. Writers Hong Jung-eun and Hong Mi-ran of Fantasy Couple, My Girl and other dramas have captured the new generation with their characteristic lighthearted style. On top of that, PD Hong Sung-chang directs with a witty touch. They were able to charm the young generation with trendy-drama features that haven’t been seen much in Korean dramas for a while.

In the early part of the broadcast, these parts were also detriments. Viewers weren’t able to easily adapt to the artistic style and editing, which recalled Japanese dramas. At the time, one rep from the production of You’re Beautiful said, “Until Episode 2 aired, there were a lot of viewers who felt that the drama’s style was awkward. However, after Episode 3 when the story settled in, those concerns were alleviated.”


Fandom phenomenon on the online forums

One can easily see the fandom phenomenon for the drama when looking online at the forums. From the afternoon of the drama’s first broadcast, viewers posted messages in anticipation. Comments like “Today is a happy Wednesday, I can meet Jeremy [Lee Hong-ki]” and “Finally I can see Shin-woo [Jung Yong-hwa]” flooded the board. One poster who watched IRIS but transferred her interest to You’re Beautiful was met with a rash of welcome messages.

Discussion arose online regarding what fans could do to raise the ratings. After every episode airs, there’s a clear comparison between the online forum’s debate about the story development and IRIS’s forums. Seeing them in action, they seem less like earnest drama fans and more like the fan club of a real idol group. Ultimately, the fandom of You’re Beautiful doesn’t convey the feeling of merely “watching” the show, but can be understood better with the word “enthusing.”

The recent rise in the ratings corresponds to the drama’s melodramatic storyline coming into full swing. Chief producer Jo Nam-kook expressed his confidence: “Our drama has fierce support among female teenage students. Thanks to them, we’re better off than I’d feared and continuing to fight. If I could get my wish, I’d like to raise the ratings to about 13%, but in order to achieve that, we’ll need the support of thirtysomething women viewers, too. With the recent introduction of the melodramatic line, I don’t think that’s an unreasonable wish.”