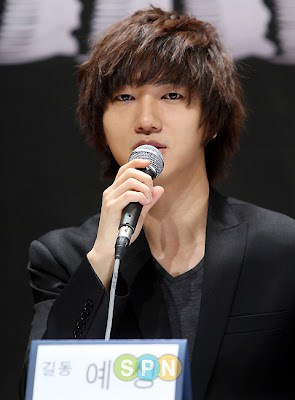 Super Junior Yesung revealed his sincere wish of keeping with the acting field.

3 PM May 24th, Yongsan National Museum of Education Center, at the ‘Hong Gildong musical press conference, Yesung said: “I practised really hard (for the first stages) and heard a lot about it”.

Although he is busy with Super Junior’s 4th album ‘Miinah’ activities, but “there are many other actors with different schedule still saying that they do not practice enough, though. I also wanted to learn more from them. Therefore, I decided to take part again”, said Yesung.

“Talking about the representatives of our country, it’s hard to distinguish between Hong Gildong and Lim Kkeokjeong. I want to live like them two”, he said. With a witty remark, Yesung added: “Were I to have a kid, I would read Hong Gildong biography”.

“Hong Gildong is a real person whose righteous life I always wanted to live. I also even picked up trash paper”. Yesung left the audience laughing with his sudden speech.

Yesung revealed: “I really want to act. I have sung a lot on TV. But I have a great desire for acting. Doing musical gives me a lot of advantages as it features beautiful songs and requires acting skill. I am into musicals now, but later I’d like to act in dramas and movies, too. Right after ‘Namhansansung’ I was asked to be a part of ‘Hong Gildong’. However, I have been unable to organize my schedule with the fourth album activities”, he said regretfully.

The encore performance of Hong Gildong will be held from June 5th to June 13th at Seoul National Museum of Theater.