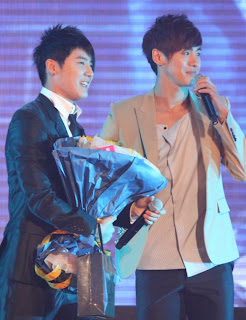 (Xiah Junsu is on the left)

Idol group TVXQ member Xiah Junsu is reported to gain revenue from his activity in Japan worth for 3 billion won.

Xiah Junsu is going to release his solo single in Japan in the following 26th, entitled ‘Intoxication’. This single currently recorded 75,000 copies sales for CD version and for the special package that includes DVD is sold 85,000 copies, summing a total 160,000 copies sold and about 3 billion won revenue is expected to flow.

His Japan agency official said, “This single contains song ‘Kanashimi No Yukue’ which is going to be soundtrack of TBS Drama ‘A Love Letter 5 Years from Now’, due to this, the interest of fans (to the single) is likely to grow even more.” In addition, “Moreover, this single will be Junsu’s first solo single apart from TVXQ as a group, thus seems to pump up the interest this high.”

Meanwhile, the three members Junsu, Jaejoong, and Yoochun will be holding a fanmeeting event tour in coming early June to Osaka as well as Tokyo, Japan.

It's more like Avex getting the revenue :), Need to pay staffs,promotions and so on.