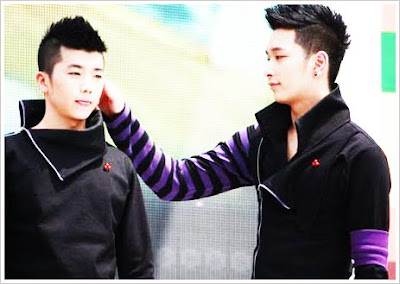 2PM Wooyoung has filled the empty space of Chansung.

On MBC FM's 'Park Kyunglim's Stars Shining Night,' a picture was uploaded on the program's board with Wooyoung as a special guest beside DJ Park Kyunglim.

On this day, Wooyoung took the place of Chansung, who was diagnosed with enteritis after revealing abdominal pain on the 23rd at SBS Inkigayo.

In the picture, Wooyoung is posing with Park Kyunglim like they are close siblings.

An associate of the program introduced Wooyoung as 'the kid that always bothers his manager to appear on 'Stars' whenever there is an opening.' He went on to state, "Like an idol that's active in varieties, he's able to get the audience to laugh."

Recently, Junsu's knee injury kept 2PM promoting with five members but with Chansung's enteritis diagnosis, they have revealed that they will be continuing as four.

May be taken out with full credits. You are not allowed add yourself to the credits nor edit the credits.
CREDITS : TV DAILY (SOURCE); hazyfiasco@2ONEDAY.COM (TRANS)
Tags: 2pm, Chansung, News, Woo young
Share
Previous articleNext article