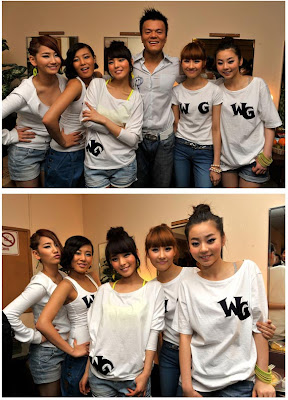 The Wonder Girls are back in Korea and they just held their first press conference today at 2PM
It's been 7 months since the girls left Korea, but they returned with good news as they reached the 76th spot on the TOP 100 Billboard chart with their english version of Nobody.
Each of the girls started the conference with a little message and talked about their time in America. The mood was somewhat sombre when Mimi teared while speaking.

Mimi:
"When I first went to America, I cried every single day. I think it was because I'm so young and I was also lonely. It took some time to get used to it, it was also difficult meeting people because I couldn't speak English. However, because I had the other members, they gave me the strength and courage. Also, as America accepted our song little by little, that also gave me strength."

Yenny:
"I was so thrilled that people at the Jonas Brothers concerts knew our music."

Wonder Girls:
"In America right now, Yenny is definitely the most popular."

JYP:
"I feel so proud of the Wonder Girls. For the past 7 months they suffered and went through a lot of rough times, but they worked so hard. They are truly amazing. They may not be the prettiest, the best singers, or the best dancers in the world, but I know for a fact that they are the hardest working and kindest singers in the world."

Sun:
"Although JYP says we suffered a lot, we also felt and experienced a lot of new things. JYP also gave us a lot of nice things to help us through the rough times

JYP then shocked everyone by stating:
"Right now there are no retro artists in the states. The Wonder Girls will have another upgraded concept in America, but it will be similar. At the moment we have no plans for any activities in Korea. They are doing well in America. We didn't go there just to gain more fame in Korea, we went to America because we wanted to succeed in the US market. Moving forward, our plans are to continue in the US and European markets. A lot of people are doubting us, but I want to break that mindset. It is now the beginning and we will give it our all. Even if we fail, we will fail with pride."

Starting in November, the Wonder Girls will be featured in many American newspapers, magazines and will also attend TV programs. In addition, next year they will release a full album in the states.

To wrap things up, Mimi talked about how she loves Girls' Generation as well as f(x). To which JYP stated, "I think I have similar tastes with Yang Hyun Suk, so for me, 2NE1 leaves the biggest impression in my mind."