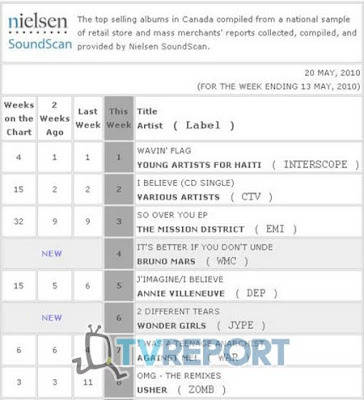 Girl group wonder girls are making it's way to the Canadian Singles Chart.

Wonder Girls "2 Different Tears" has entered the Nielsen Soundscan chart and was able to enter the chart at the Number 6 spot.

Their new album was released in the USA at May 16 and held a launching event, over 10,000 witnessed the event they performed their new songs as well as their hit songs. Shortly after the album was released, it was doing well on many music charts not only in domestic charts but at the iTunes charts as well.

The wonder girls will be going to have their American tour over 20 cities by June where 2pm and 2am are also expected to tour with them and perform as special guests.