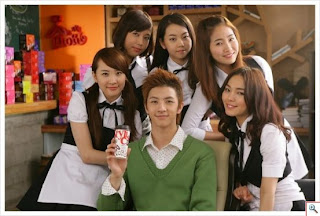 J.Tune added that the shoot is set to take place today with the Wonder Girls who are briefly visiting Korea after ranking No. 76 on Billboard's Top 100 last week to become the first Korean artist to place on the esteemed chart.

Cheon Dung, whose real name is Park Sang-hyun, received much attention ahead of his debut as girl group 2NE1 member Sandara's younger brother.

MBLAQ is the first group Asian superstar Rain created and introduced to the public since turning producer.

The five-member group's debut album, released on October 14, reached No. 1 on several offline and online charts on the day of its release. "
- jesskim@asiae.co.kr