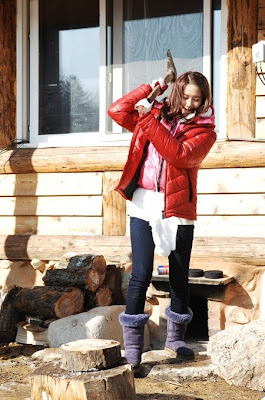 Last April 19, SNSD member Taeyeon left MBC Chin Chin radio show as the DJ, she had been the DJ for 2 years and she had to leave due to too many activities, she has her musical and oversea's activities as well with SNSD.

Yuri and Sunny of SNSD also has officially left G7 in the show "Invincible Youth" where they were permanent members, they will be having their last shoot this coming May 19. They had to leave also because of oversea's activities with SNSD with their first Asian Tour.

Jessica of SNSD who had weekly appearances in KBS "Happy Birthday" also will be leaving the show. Jessica had good response for her appearances in the show and she had to leave due to she needs to concentrate more with her activities with SNSD.

Yoona of SNSD is also a permanent member of SBS "Family Outing 2" and due to the upcoming oversea's concerts of SNSD for their Asian Tour, looks like it us unavoidable that Yoona will be leaving the show but these are just rumors and speculations among netizens.

Yoona's agency SM Entertainment said that "Yoona's departure for Family Outing 2 has been discussed", meanwhile SNSD and Wonder Girls are also expected to be guest's on Family Outing 2 and will be recording for the show soon.

Due to SNSD's upcoming oversea's activities, they need to concentrate more on preparations and due to the fact they will be gone in Korea for quite some time, member's had to leave their variety programs guesting's due to the long absence.

Although broadcasting agencies are trying to make amends with the situation. Officials are trying to have a fixed period for shooting for the shows for the future of the shows and they are still discussing about it.