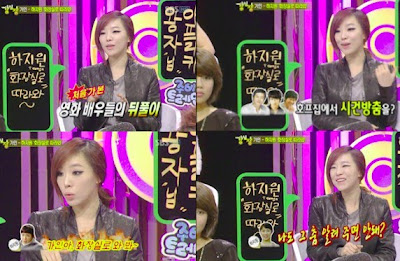 On the episode of SBS Kang Shim Jang that aired today, Brown Eyed Girls' Ga-In talked about how excited she was to eat with Korea's top actors such as Kim Ju Hyuk, Song Seung Hun, Sul Gyung Goo, Jeon Do Yeon, and Ha Ji Won.

When Ga-In went out to dinner with those people after filming "My Love, By My Side," none of them recognized her because she wear little to no make-up in the film.

Ga-In said, "I was all excited. They are celebrities to me but they thought I was amusing because I was the only singer there. We were having a party and enjoying ourselves then our song "Abracadabra" comes on. Song Seung Hun, Kim Ju Hyuk, and Sul Gyung Goo started dancing the Saucy Hip Move! They all wanted to officially learn it so I taught them. But then Ha Ji Won unnie looked uncomfortable. She then told me to come to the bathroom with her. I was so scared not knowing what I had done wrong. Then in the bathroom she said, 'Can you teach me the dance too?'"