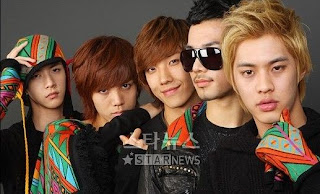 An official from MBLQA’s agency J.Tune entertainment expressed, “Various products such as communications, clothes, snacks, beverages, etc. have continuously been asking MBLAQ to appear in their ADs. Like the singer Rain produced, MBLAQ is getting famous in spite of a new singer.”

Cheon Doong, a member of MBLAQ, already agreed on an AD contract for coffee brand Cafemory as soon as they debuted.

Since it is said the AD industry is pushing for even what Rain and MBLAQ will simultaneously appear in a single AD, their appealing proposals to MBLAQ are expected to increase more.

MBLAQ given the nick name of ‘Chiq Idol’, is quite busy with their powerful dance song ‘Oh Yeah’ which emphasize its own guitar melody under the concept of ‘Vampyre clothing style’ on the stage.