Share
0 comments
*Another Open Your Bag, but I found out this one is interesting too* 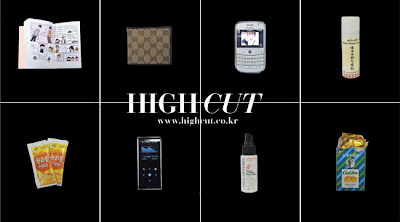 Comic book from a Japanese fan U-Kiss' daily life drawn into a comic, a prized-possesion.
Gucci wallet bought on my own.
Blackberry White Bold mainly uses the messenger.
Chinese Plaster thankful for this present from the Chinese fans when he injured his leg.
Citron Tea good for when your throat is bad!
Samsung Yepp MP3 borrowed from my nuna.
Paul Mitchell Water Spray for my hair that must stay in place on stage.
Chinese throat candies Alexander hyung's mother picked them as a gift for me.

Soohyun, who has the most masculine image in U-Kiss, uses a Calvin Klein bag which is a gift from a nuna fan.

The first thing that caught our eye was a comic book from U-Kiss' Japanese fans. "The Japanese fans drew our everyday life into a comic book and gave it to me as a present. I was really touched." It is a good form of entertainment when he is bored.

His bag is full of health supplements. GS25's Citron Tea and Frisk Mints, Golden Throat candies for his throat.

The mini first aid box containing a rhinitis spray and plaster are presents from fans. "I injured my leg when we went to China. The Chinese fans bought it for me when they discovered I was limping."

For his hair that must stay in place, he uses Clean & Clear A clearing speed gel and Paul Mitchell water spray and Gatsby wax. [Note: I know Clear & Clear is for your face, but that's what the article says ~.~]

Since he doesn't know when he would need to suddenly work overnight, he carries around a pair of Calvin Klein underwear and socks.

In his Gucci wallet which he bought on his own, he has T-money transport card, Lotte World year pass, CGV point card and a health club membership card as well as a credit card.

He bought the latest release by Early Adaptor - the Blackberry White Bold.

The first on his shopping list for 2010 is an iPod Touch. "I am using my nuna's Samsung Yepp mp3 but because it has a low capacity, I only listen to U-Kiss' songs and songs I use during practice. I must! buy an iPod Touch."