The SSFF (Short Shorts Film Festival and Asia) 2010 will be held next month in Japan and will feature music videos from South Korea.

The Korean music videos that will be screened during the festival include Wonder Girl's Nobody, SNSD's Tell Me Your Wish, Big Bang Taeyang's Wedding Dress and Hallyu Star Park Hyo Shin's After Love.

Short Description of Wedding Dress from the Official Website:
The woman you love is marrying another man. On top of that, you have to sing the song to congratulate them at their wedding. The story flows between the dramatic scenes that expose the heartbreak felt and SOL's expressive dance scenes in a studio. The contrast of the white backdrop in the dramatic scenes and the black of the dance studio give the film a distinctive visual quality..

Program Schedule under the cut. 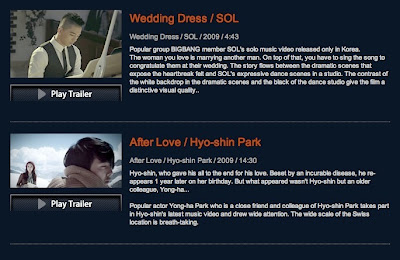