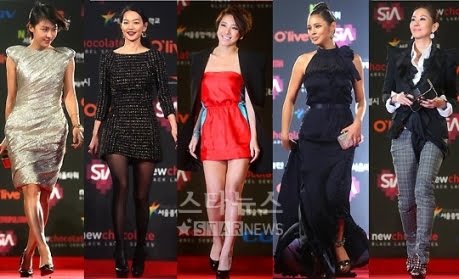 Actress Kim HyeSoo has been chosen as the best ‘Style Icon’ for 2009.

2009 Style Icon Awards ceremony took place on 11th November in Seoul NamSan N Town Air Dome and Kim HyeSoo has been chosen as the ‘Icon Of The Year’ and ‘Female talent’ award.

Actress Ha Ji Won, on the other hand was awarded for 2 awards as well, for ‘Fun Fearless Female’ award and ‘Female Actress’ award.

Go under the cut for more winner list and photos!

The MCs to the awards ceremony are: singer Seo In Young, actress Park ShiYeon and broadcaster Baek Ji Yeon.

2NE1 won the Female Singer for Style Icon this year, and I feel that they really deserve the title of style icon. The intro for them to the stage was especially amazing to me. Enjoy the video, comment but no spamming/bashing. Please respect each other. Thank you.