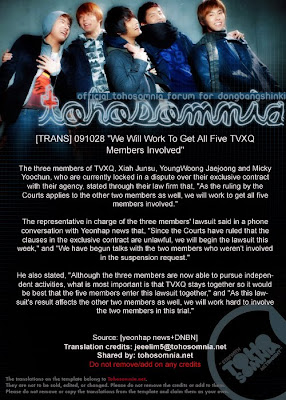 Looks like, YunHo And ChangMin Will be joining the lawsuit o.O :)

1. Seoul District Court is so far favoring JaeChunSu side. They partially accepted the exclusive contract suspension the trio have been submitted. The partially accepted here so far only mentioned about the three members now can have their right to decide whether they will take one job or not. So the three members are now like 3rd parties to SM. Said that with this decision, TVXQ activities as five members will lay on three members‘ decisions, and not SM Entertainment.

2. With the point that TVXQ activities as group can still be continued, thus Court couldn’t terminate the clause about income distribution (which I’m a bit blurred here~however not in any line there’s a say that Court already deals with the unfair distribution income nor the length of contract).

3. SM is NOT YET saying anything about accepting or refusing this decision. They still said in their press release today, “About our exact official stand, we will inform it soon.”

4. The three members also have not fully agreed with the current decision. However, they’re now preparing to settle matter with SM regarding the existing payment settlement to prevent another unfair payment in the future, as well as the fact that they haven’t received any payment from SM since February this year, and another remaining issues about income distribution.

6. This is NOT final decision. As SM hasn’t said anything and the main point of this case, the income distribution is not yet solved.


Always Keep The Faith !!!!! This is a good start & i want the boys to get back their pays & $ that they earned.SM did not pay them since Feb This year.

The News Video with Eng sub :