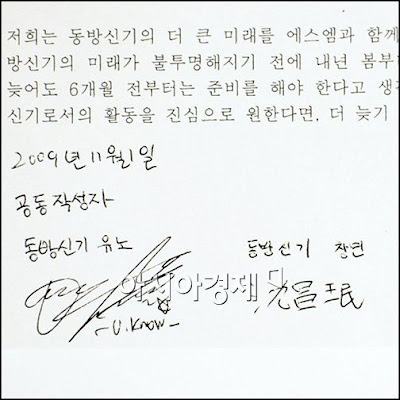 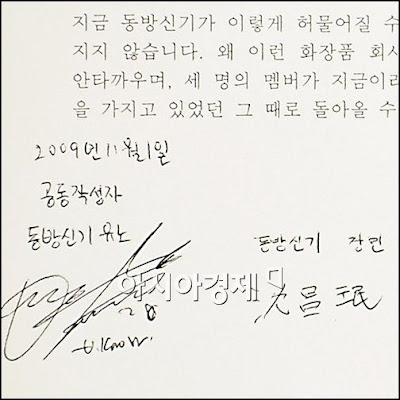 Yunho and Changmin of DBSK said in a written statement that they'll stay with SM Entertainment.

"We will stay SM Enterainment" was a statement they have written at 63 Building at a DBSK-SM press conference today.

We will report you further on this situation when more information is available.

It seems like a Shinhwa situation will arise as these two showed faithfulness towards SM Entertainment. Although this decision was made by Yunho and Changmin, just the way things were written feels like Lee Soo Man has a good grip on these boys.

UPDATE: compiled document stated:
The two members' thoughts were delivered through a compiled document, which stated:
We five members of DBSK signed the same contract with the same clauses and for the past five years, and have worked together under same conditions with utmost trust in the company, each other and our dreams. We intend to share our dream and future with the company and keep the promises we made in the contract. DBSK was made by SM and we intend to work as DBSK with SM.

No other company can create DBSK, as only SM can provide the best production and management team available. The three members must know better than anyone else that SM is the one who knows DBSK the best and made DBSK the best. We intend to keep trust and promise and thus intend on staying with SME. DBSK's grand future will be with SME. We believe that our Korean promotion, planned for next spring, should be prepared at least six months in advance before our future as one DBSK becomes unclear. If the other three members truly want to stay as one DBSK, they must make a decision before it is too late.


They also commented on the beauty product controversy which sparked this legal dispute:
The beauty product business changed everything," they stated, "We are not familiar with the matters but we believe that a legitimate company that seeks to do business with DBSK must consult with SM first. It is common sense. We did not get involved as getting involved with a company that sought to do business without SM would have meant that trouble was ahead.

We did not want the reputation and pride of DBSK, earned by our hard work, to get ruined by a beauty product company that did not work in a legally respectable manner. We are not aware of the contract between that company and the three members, nor do we know what those members were told or how much they have earned through their deal. What we do know is that the fact that DBSK, forged together for 5 years by all of our dreams, have fallen into the current state because of an unethical company is simply unacceptable.

DBSK crumbling away like this, this is all so unbelievable. It is sad to see that this was all caused by some beauty product company, and we hope that the three members would come back to the days when we were all working hard for our dreams.