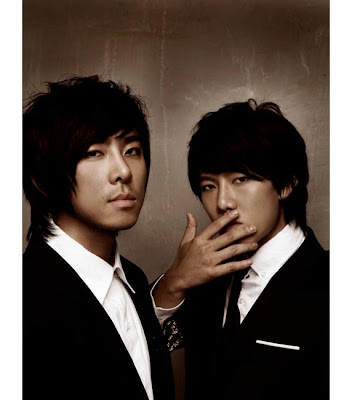 The time has come! Yet another male artists, this time a duo, will be making their debut!

It has been a long time since we mentioned about the rookie duo December, as about a month ago, we revealed that they will debut in october. We also revealed that Lee Min Jung, had been cast in December's debut MV, who picked their MV over G-Dragon's MV for "Heartbreaker," as well as their familiar styles of singing like the male duo Brown Eyes.

Well more information about December has been revealed, as pictures of their faces were released!

The two members are Yoon Hyuk (25), and Dae Gyu (25). After their faces were released, netizens started commenting that "Yoon Hyuk looks like DBSK's U-Know Yunho," as well as "his smiling face looks like Lee Wan, who is Kim Tae Hee's little brother."

Representative of December's agency, CS Happy Entertainment, stated, "We were afraid of the reactions of the people who follow musical industry these days who look more at the looks as we focused on their skills rather than their looks. ... We wanted their skills to be showcased first as we wanted to reveal their faces after the release of the album, but because of the misunderstandings of netizens commenting 'stupid strategy,' and 'because their ugly,' we wanted to prove that it is all a misunderstanding. ... Now it's time to capture the publics attention with their skills."

The album which will be released on the 27th had a lot of effort put in, as the production fee costed around $30,000, as well as getting an orchestra of more than 100 people. They are currently preparing for their debut stage.