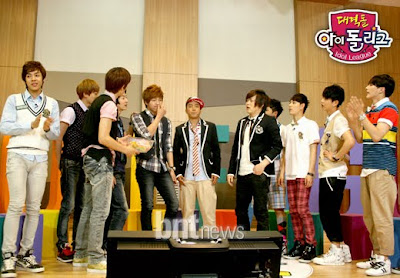 U-KISS's Kiseop has become a hot topic for his ability to put 650 won coins into his nose.

During the filming of KBS JOY 'Idol League' that will be aired on the coming May 18th, Kiseop took part in the 'Catch A Mouse' game that was made popular by the past variety program 'Heroine 6'. During the game, they had to put 500 won, 100 won and 50 won coins into their nose, which is something bizarre and daring for idols to do.

The two MCs, Eun Jiwon and Moon Hee Jun, took the challenge first by putting a 500 won into their nose. However, both of them gave up due to the pain.

For the penalty, Kiseop has to put 500 won coins into both of his nostrils, showing a side of him that hasn't been shown before, which made the crew and the members burst into laughing.

U-KISS 'empty-headed' Kiseop's nostrils-in-action can be seen on the May 18th broadcast of KBS JOY 'Idol League' Episode 3, at 6:50 pm.