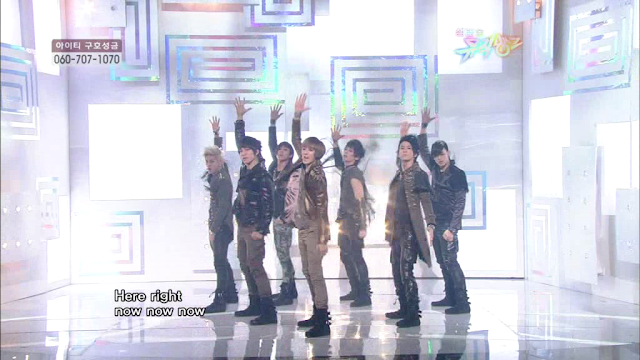 ‘Am I That Easy’ U-KISS returned with ‘Bingeul Bingeul’.
U-KISS made their comeback on the February 5th broadcasting of KBS Music Bank, performing their title track ‘Bingeul Bingeul’ taken from their 1st full album ‘U-KISS 1st ONLY ONE’.
U-KISS who gained popularity with their strong guy dance through ‘Man Man Ha Ni’, will continue striving to the top with ‘Bingeul Bingeul’. This time, their title track is accompanied by more intense dance steps called Whirlwind Dance which already caught people’s attention.
In the waiting room, U-KISS’s Soohyun told the reporters about their comeback performance after the pre-recorded session “Looks like we didn’t do well if to be compared with what we had practiced. We prepared really hard but too bad, we wanted (to show) more.”
U-KISS first released their music video on the same day as their comeback stage. There are two versions being released, the tattoo version (released on cable channel) and the clean version. The cable released MV contained the close-ups of each member’s topless upper body with tattoos, showing their masculinity.
Source: Newsen + MyDaily
English translation: contiukiss