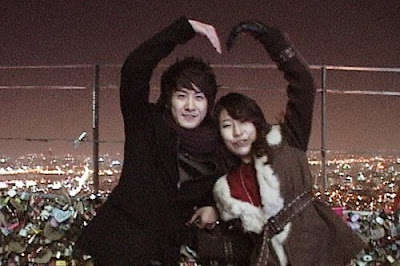 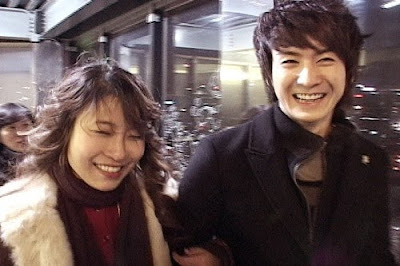 Some information about the show (not included in the article):
The show is called 'Bomb Scandal'. Basically, it's similar to Mnet Star Scandal except, these people involved are known as '폭탄' (Pok-tan), which literally means 'Bomb' in Korean. 폭탄 is also used as a Korean slang referring to someone who you know online, but when he or she shows up in real life, they turn up to be a disappointment (usually in terms of looks).
U-Kiss' Kibum goes on a surprise blind-date with 'Bomb' Lee Se Young.

In the latest recording of E Channel's 'Bomb Scandal', Kibum attended a blind date through an introduction by singer-cum-actress Yoo Chae Young.

Although Lee Se Young was obviously flustered at the sudden meeting of an Idol star, she had asked Yoo Chae Young for advice on how to win over her partner's heart.

One dating know-how that Yoo Chae Young emphasized is to get closer by meticulous planning beforehand and going out with more people to gain experience. Yoo Chae Young's know-how is the secret to her marriage with her 10 year friend turned husband.

Kibum is SS501 member Kim Hyung Joon's younger brother and has been receiving a lot of love through 'Man Man Ha Ni' as U-Kiss' pretty boy. At their first meeting, Kibum gave the nervous Lee Se Young warm drinks and a scarf as presents, melting her heart.

The two people chose Namsan as the venue for their date. Kibum told Lee Se Young, "if there's anything you want to do during the date, say it." Lee Se Young's unexpected suggestion caused Kibum to be taken aback. She suggested that they do the kiss scene like the main actress in 'My name is Kim Sam Soon'.

The production team of 'Bomb Scandal' stated, "Yoo Chae Young provided a step-by-step dating know-how but it seems like Lee Se Young was stunned by Kibum's charm and forgot it all in that instant."

E Channel PD Kwon Yong Suk said, "Before the last broadcast in December, 'Bomb's Jung Ki Hyuk and Lee Se Young were told that they would be competing for a prize of 1,000,000 won (approx $1000)." and "Lee Se Young hopes that her blind date with Kibum would help her greatly."

Check out the teaser: