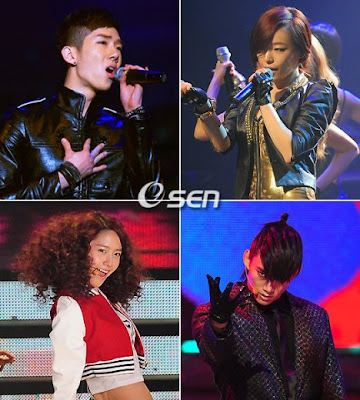 It isn’t hard to find an idol group member featured in variety programs. In many different show programs, the necessity of an idol star is highlighted, and it gives another chance to the idol stars so that they could show off another side of them beside the music stages.

Especially in these days, along with the rise of real variety programs, the “made” image of an idol is slowing being unveiled. However, no matter how much they “mess up” their image on these shows, back on stage, they become the role models of many.

The “blue chip” of the entertainment industry these days is 2AM’s JoKwon. In many different entertainment programs, JoKwon earned the title of “Kkap-Kwon” through his craziness. Also in MBC ‘We Got Married’, he also earned the image of a cute husband. Along with the news that he joined the season 2 of ‘Family Outing’ which is being broadcasted on February, fans are excited to see what kind of image he will bring on screen.

He earned the image of a cute, adorable, and little husband through a “fake” marriage with GaIn. He gained the image of being nice, but cute among the fans of the show. However, when he moves on to the stage, he turns into a serious musician. In the recent album, the expression on JoKwon’s face is straight and his voice is yearning. Even during one episode of We Got Married, when JoKwon cracked his voice during a rehersal of the song ‘We Ended Up Loving’, he was heart broken and at some points almost showing tears due to the mistake.

Girl groups are also appearing in the variety programs causing the difference from the singer and the real person. On ‘We Got Married’, Brown Eyed Girls member GaIn shows the image of an easy going, older wife, unlike the sexy image on the stage. She also shows off the boyish fashion in the fake marriage program, unlike the tighter outfits she wears in the music programs.

The newcomers Yoona from Girls Generation and TaecYeon from 2PM are also supposed to show off a whole new different side in ‘Family Outing Season 2′. Being their first time on a real variety program, one acquaintance stated that their actions didn’t quite show their idol image. The PD for ‘Family Outing Season 2′ stated, “Actually Yoona’s first image is a very pretty one. But once we started filming, she had a 4-D and curious image. Also, despite the curious image, she didn’t fall back between Kim WonHee and Shin BongSun.”

TaecYeon, who has the ‘beastly idol reputation’ will be showing off the ‘boy’ image for the filming of ‘Family Outing Season 2′. The staff of Family Outing stated, “We thought that TaecYeon might show us the more manly side compared to JoKwon, but once we started filming he showed off a more of the boyish and cute image. A stage is just a stage, but in the real variety program, it will show the actual sides to TaecYeon besides the strong image he had until now.”