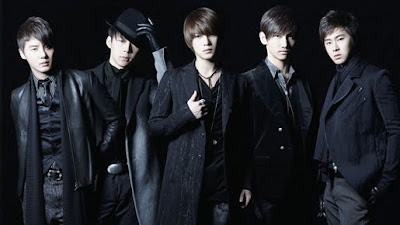 It became clear on the 8th that TVXQ will be in charge of a theme song of the movie "Kimiga Odoru Natsu" (*Meaning,"Summer Dancing You"), a lead actor will be Junpei Yokomizo (20).
The title music is "Ｗｉｔｈ Ａｌｌ Ｍｙ Ｈｅａｒｔ～君が踊る、夏", which is recorded in TVXQ's new best album "BEST SELECTION 2010" that will be released in Japan on the 17th. This gem song with the piano ballad will heap up an impressive product of this film which portraits the maturing period of youths.

The festival featured in the movie has thick pastime that gives poetic charm, portrayed in the summer of Kochi (prefecture in Japan) is the stage. It is a story the young man of the lead character struggles with a fighting spirit with their friend; for a girl living toward the dream to dance at a festival while having an intractable disease.

The movie producer Shun Arikawa who is a great fan of TVXQ from their debut in Japan in 2005, sent them a love call last November to seek them, "To sing the wonderful theme song which matches in a story of the dream that youths lost and the broken friendship to be regenerated."

Arikawa said that he thought that, "Only TVXQ who continue to charm Asian youths are able to stream down courage and hope through their song and dance!"; from the very beginning when he decided to film this movie after observing a Yosakoi festival for the first time.

The offer was sent when three members were opposed over a contract dispute issue with their office in Korea and when media was paying attention toward their future activities. In addition, it was the time when it was very busy for them with TV program collecting of the end of the year programs in those days. However, the five members were touched by the enthusiasm of Arikawa and willingly consented to his offer.

In the past, they experienced movie theme song of the animated cartoon in Japan; but, as for Japanese movie (the photograph taken on a spot), it is their first experience. Therefore their representative production of the piece was asked to be written by Shinjiro Inoue who has good reputation by writing TVXQ's famous ballad musical piece “Stand by U". (*Inoue Won two Japan Record Taisyo Award by TVXQ songs and he is also a huge fan of TVXQ! ^^)

It is a piano ballad song which five members love to sing. The recording was performed in a studio of Tokyo in the beginning of December, last year. At the recording session, they hit a hot feeling and sang it emotionally without compromising at all. The ballad song which overflows in passion and an impression to color the youth movie was completed.

Arikawa said that when he first heard the sound source, it was really good and he even said, "This is it! This song matches the movie perfectly!" He was moved very much and decided to use the music in a song of insertion as well as a theme song. It is also collected in TVXQ's first best album "BEST SELECTION 2010" that will be released on the 17th.

It seems to place a one good stone (step) for their contract issue that their movie theme song will be open in Japan in September, 2010. Their Japanese position office, AVEX announced, "About their future activities, we will announce when it is officially set."

It seems we will be able to expect further activity of TVXQ all the more.