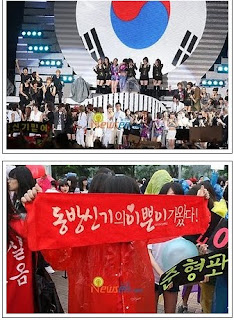 T/N: You can see a part of a 'I believe in TVXQ (동방신기 믿어)' placard in the bottom left hand corner.

TVXQ, Park Jaebom... Although they, who once set alight the Kpop scene, were not there, their presences still lingered.

At the 'I Love Korea 2010 Dream Concert' held at the Seoul World Cup Stadium on the 22nd, an unusual sight could be seen.

TVXQ, whose members are currently in a legal dispute with their agency, did not appear at the Dream Concert but still showed off their powerful presence. Currently, YoungWoong Jaejoong, Xiah Junsu and Micky Yoochun are locked in a legal dispute with SM Entertainment over their exclusive contract and the group is in trouble of disbanding.

However, their fans' determined will was like none other. Cassiopeia, who were located in the center of the stadium with their red balloons and glowsticks, sang numerous hit songs by TVXQ such as 'Balloons' and 'Jumun-MIROTIC' to show their never ending support for TVXQ.

There was a chant that did not stop throughout the entire show. It was of TVXQ's Japanese name "Tohoshinki". That day, fans of Super Junior, Girls Generation and TVXQ fans shouted out the name of TVXQ, who did not attend the concert, and wished for the reconciliation between SM and the three members. This is because TVXQ's YoungWoong Jaejoong, Xiah Junsu and Micky Yoochun are locked in a legal dispute that has brought them to the brink of disbandment.