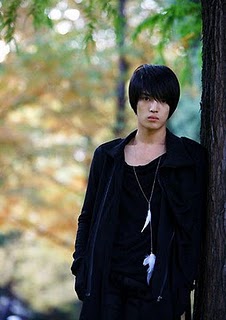 Exclusive pictures from the Japan-Korea collaborative drama “Heaven’s Postman”, which was Jejung's acting debut, have been released! Jejung plays a postman who lies to those who have lost their loved ones, and providing whispers of happiness to them.

“Heaven’s Postman” Photo Gallery
This show was created by the famous Japanese scriptwriters, starring a popular Korean actors and actress, and is one of the Japan-Korea collaboration projects for “Telecinema 7.” Director of the popular “Halfway” (starring Kitano Kie and Okada Masaki) directs the screenplay written by Eriko Kitagawa, and co-stars Han Hyo Joo, who also starred in the hit drama "Brilliant Legacy", which enjoyed ratings(in Korea) as high as 47.1%.

The story is about “Heaven’s Postman” Jae Joon, who has a strong link to the dead, yet cannot be seen, who meets Ha Na. Jae Joon’s work slowly helps to heal her broken heart , and the story describes a search for the route of rebirth. This time, the exclusive photos from Jejung express a situation where, while helping those who are grieving and need help using unconditional love, there is no one to heal yourself.

Telecinema 7 was aired in Korea in November last year. Aside from “Heaven’s Postman”, and popular group BIG BANG’s T.O.P and V.I.’s acting debut in “19”, Osaki Masaya’s ( Scriptwriter of “Hitoshi Tadano, the Extraordinary Undercover Detective”) “Triangle”, “A Dream Comes True”, “Paradise”, “After the Banquet” and “The Relation of Face, Mind & Love” make up the remaining 6 stories.

Telecinema 7’s collection of 7 stories (Including Heaven’s Postman) will be released by Toho Co. Ltd throughout Japan on the 29th of May.
Source: [Eiga.com]
Translation credits: Ssunsett@tohosomnia.net
Shared by: tohosomnia.net
Do not remove/add on any credits
Tags: Dbsk, Hero jaejoong, News, Tvxq
Share
Previous articleNext article